A Night to Dismember (1983) Doris Wishman 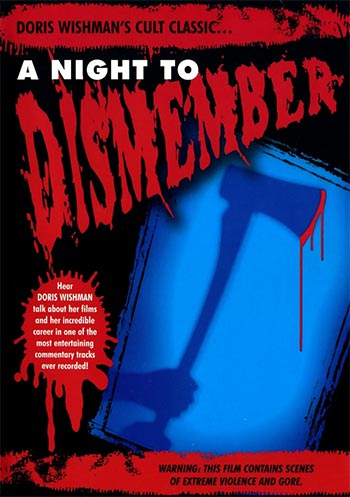 A woman from a “cursed” family is released from a mental facility, and soon dismembered corpses start turning up.

Doris Wishman’s “A Night to Dismember” is an ultra-cheap and sleazy slasher flick that simply has to be seen to believed. Wishman was an innovative low budget filmmaker. Her directing, editing and marketing of her films was all self-taught and almost all of her films were self-produced. “A Night to Dismember” is her only full fledged horror film. It is also a big mess. The editing is beyond awful, the use of same location in several scenes is painfully obvious, the acting is amateurish and the story is illogical and confusing. Still the film is never boring and there are some fairly nasty scenes of gory carnage including ripped out hearts and chopped off fingers. Basically “A Night to Dismember” is about psychotic woman who gets out of an insane asylum and promptly starts butchering people around her. Give this low budget trash a look.