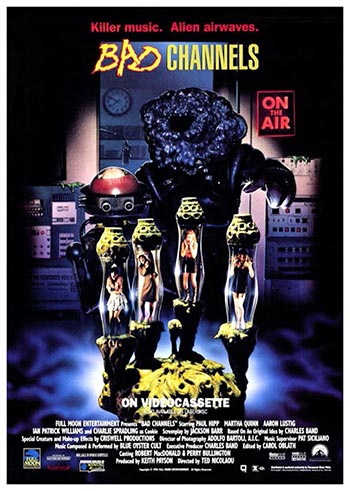 An alien lands in a small town and promptly takes over the local radio station. The disk jockey, Dan O’ Dare, well known for his publicity stunts, becomes a hostage. The alien uses the radio station and Dan’s amused audience to target and subsequently shrink women for his collection.

This admittedly silly Full Moon film is a sci-fi rock’n’roll comedy, and it delivers the goods with pretty girls, great music and some laughs too. No one will call this movie a classic, but it’s fun in a “check your brain at the door” sort of way. The music is pretty awesome. There’s a heavy metal song (with Ron Keel), a grunge rock song and, “Manic Depresso” by Sykotik Sinfoney, a silly song with guys in clown, cow and nun outfits. Yes, really.

The acting is fairly good, although some actors are a bit over the top. Ted Nicolaou’s direction is competent, if uninspired. The music score is by the rock band Blue Oyster Cult.