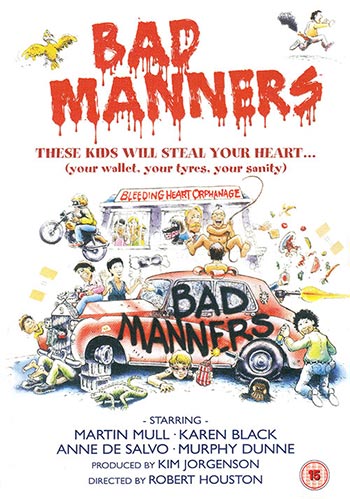 Everyone is a stereotypical extreme in this sometimes mean-spirited black comedy about the vicious staff at an orphanage, the garrulous punk kids who live there, and the pretentious overblown rich couple who adopt one of the orphans — this is not a happy world. In the Bleeding Heart Orphanage, Sister Serene (Anne De Salvo) applies all the mental and emotional restrictions she can to her wild charges, while Kurtz (Murphy Dunne) applies the electric cattle prod. When one of the children (all around 10 years old, more or less) is adopted by Mr. and Mrs. Fitzpatrick (Martin Mull and Karen Black), his cohorts come to rescue him from the terrors of an upper-class Santa Barbara existence — and subsequent mayhem ensues.

With a low-brow, low-budget approach, the premises are obviously meant to key in to the slapstick characterizations, but for some viewers, even the comic moments may not assuage the meaner undertones of the film.