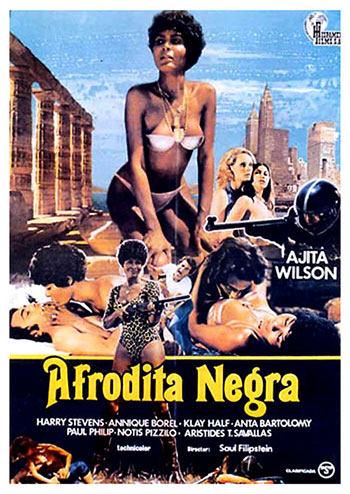 New-York, American Intelligence Agency offices. AIA’s Boss is informed that an important arms lot is about to be delivered to an African revolutionary group, via Athens, and decides to send in a team of his best agents to neutralize the gangsters; he chooses the name of the operation, “Black Aphrodite”, as Tamara is going to be the leader of this dangerous mission, and she is a sexy black woman. The other four team members are tough mercenaries with lots of experience, led by Steve. Steve has a lover, though, Edwige, a sensationalist reporter always avid of a good scoop. Soon, Tamara and Steve are having hot sex, though. Edwige does not mind it at first, because she is bisexual, and is having hot sex with Julie, a beautiful brunette who unfortunately seems to have too many ties with strange people. Julie is interested in Edwige for sex, or because Edwige is a bridge for her to approach Steve…

This fast moving sex, heist, sex, murder, and sex film…succeeds in entertaining along the lines of the euro-spy and action films it emulates. The unusual variant is that statuesque Tamara, the black Aphrodite of the title is put in command by the higher ups running the operation designed to discover who on their team is putting a spanner in the works. The guys don’t like the idea of “working with a chick” but she soon establishes her supremacy and can more than hold her own among them. This includes quickly bonding with the most aggressive and sexiest leader of the group (Haris Tryfonas) whom she takes every opportunity to mount in the female dominant position when they are not out chasing or tracking down the murderer who’s eliminating their team members one by one. Some judicious cutting of repetitive dwelling on Wilson’s bare derrière and more control of the often senseless cutting would have tightened this up and improved it immensely. As usual, Tryfonas steals the picture as he has in every film in which he appears. His edginess and underlying quality of menace keep him from being merely handsome and/or sexy, with the uncanny ability to outshine everyone else in the cast even in minor roles, causing them to seem dull in comparison. To be fair, because of her unusualness, Ajita Wilson is a good foil for him in this film. They definitely made an “odd couple” action team.