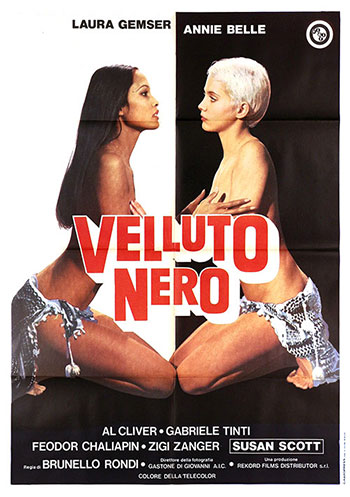 The film takes place in Egypt and basically just follows a bunch of characters. There’s no real narrative to the film so it basically just does whatever it likes for ninety minutes or so. We do have a mother character with two daughters and a servant she likes to seduce, along with a chauvinistic photographer and his girlfriend, who he treats badly; by making her pose with a load of corpses, for example. The characters then have sex in various combinations.

The best thing about Black Emmanuelle, White Emmanuelle is undoubtedly the setting and cinematography as the film really does look great and actually it’s a shame that the story wasn’t better. The beautiful scenery is matched by some beautiful female talent – Laura Gemser obviously takes part although she shares her screen time with other beauties such as Annie Belle, Ziggy Zanger and Susan Scott. The two male stars are Al Cliver and Gabriele Tinti – which lead me to believe that this film may have been the result of the cast wanting to have some fun in the desert, seeing as the two were at the time going out with Annie Belle and Laura Gemser respectively. Curiously, director Brunello Rondi did collaborate with Federico Fellini on two of his most praised films – 8½ and La Dolce Vita. Whether or not you like this film will really come down to whether you value style over substance – there is none of the latter, but the film does look very nice and there are least some memorable scenes.