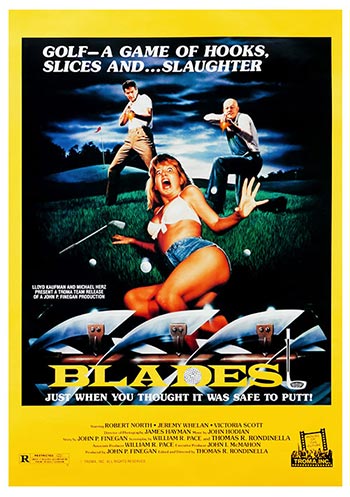 This clunky horror parody opens with a series of lawnmower mutilation murders at the Tall Grass Country Club, days before the opening of a televised Pro-Am tournament. Fearing bad publicity, the club owner enlists the aid of alcoholic pro Roy Kent (Robert North) — a has-been who can’t seem to live down a flub that caused his career to take a nose-dive years ago — to undertake a very low-key investigation. Roy’s chief rival, young Kelly Lange (Victoria Scott), insists they close the club pending capture of the killer. When the murders are pinned on the gruff Deke Slade (Jeremy Whelan), it seems the case is closed… but the real killer is still lurking about. This Troma flavored spoof plays like a scene-for-scene parody of Jaws, especially during the climax when our three “heroes” wage a battle of wills with — big surprise here — a demonic lawnmower.