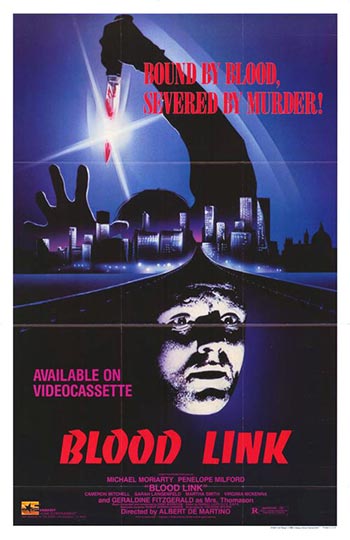 A man who has been having psychic visions of himself killing naked women soon discovers that it’s not himself he’s seeing, it’s his Siamese twin. (yes, they’ve been separated) So he travels to Hamburg, where the things he’s seen start to come to pass…

Alberto De Martino’s “Blood Link” is a pretty good thriller. Michael Moriaty plays a doctor, who has frightening visions of murder and discovers that this may be because of a psychic link to his siamese twin brother, who is murdering women in Germany. He tries to find him and stop the madness.

The cast is pretty good with excellent performance by Michael Moriaty and the score by Ennio Morricone is brilliant. There is some violence and plenty of nudity. The film reminds me a little bit Brian De Palma’s masterful “Sisters”(1973), but it has enough suspense and surprises to satisfy horror fans. Check it out.