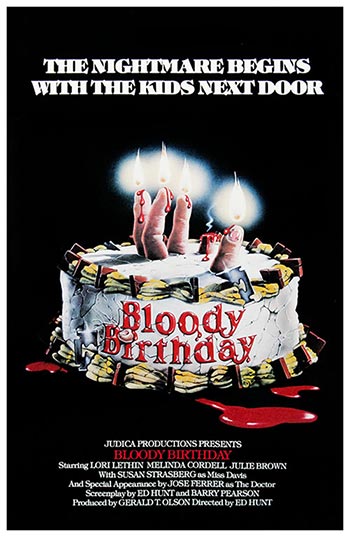 In 1970, three children are born at the height of a total eclipse. Due to the sun and moon blocking Saturn, which controls emotions, they have become heartless killers ten years later, and are able to escape detection because of their youthful and innocent facades. A boy and his teenage sister become endangered when they stumble onto the bloody truth.

“Bloody Birthday” is kinda like a mesh of “The Omen” (times three) killer-kids genre with a splash of slasher film action. The kids are suitably creepy as they prowl around town, picking off the neighbors at random, making it look like an accident each time. In addition to the disturbing premise, the film also has a startling amount of gratuitous T&A (especially for a movie with kids at its center!). Curtis shoots a pair of lovemaking teens in a van Son of Sam style, and Debbie’s bimbo older sister (played by future MTV comedienne/singer Julie Brown, pre-“Earth Girls are Easy”) has a prominent nude scene as well. Stir that all together (and try to ignore a few glaring plot holes) and you’ve got a grimy, sleazy little horror flick that would probably never get made today. Ahhh, the ’80s. When the thought of kids killing grown-ups was pure fantasy. It truly was a more innocent time.