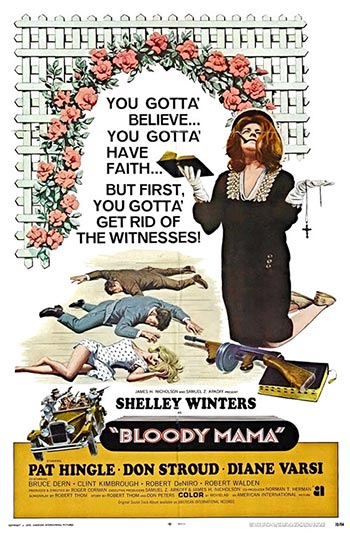 A psychological gangster film based on fact. Machine gun totin’ Ma Barker lead her family gang (her sons) on a crime spree in the Depression era. Her loyal brood have every perversion imaginable. The sadistic Herman sleeps with his Ma. When Fred Barker is released from prison, he brings home his cell mate/lover Kevin Dirkman, who also sleeps with Ma, much to Fred’s chagrin. Lloyd Barker is a spaced-out drug addict who sniffs glue if nothing better is around. Ma kidnaps happy-go-lucky millionaire Sam Adams Pendlebury and holds him for ransom. Arthur Barker – Ma’s wallflower son – and Herman’s hooker lady friend Mona Gibson also figure in the story. The bloody finale is virtually choreographed and a visual stunner.

Some movies romanticize the life of crime, or make the criminals into sympathetic characters, but Roger Corman’s “Bloody Mama” goes in the opposite direction with its depiction of the Barker crime family of the 30’s and their ruthless murders, sadism, incest, drug addiction, and insanity. It’s a morbidly colorful mixture of negative southern poor white trash stereotypes, encapsulated in a family of sociopaths, with a vintage Shelly Winters bringing her trademark intensity to the role of Ma Barker and a great cast as her sons and their associates, including Don Stroud, Robert Walden, Bruce Dern, Diane Varsi, and Robert DeNiro. A mishmash of humor and repugnancy, it’s definitely not for the squeamish.