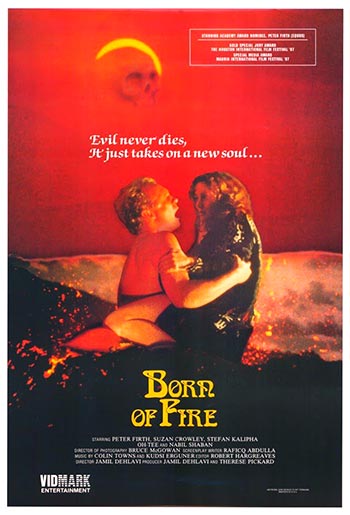 A musician searches for the Master Flautist, a supernatural creature who is planning to blow up the world.

Unusual and violent activity is observed on the surface of the sun during an eclipse. A dormant volcano erupts in Turkey. A musician (Peter Firth) is haunted by a strange melody. These are the starting points of what turns out to be a surrealist journey into arabic mythology.

After meeting an astronomer (Suzan Crowley) who observed the strange activity on the sun, Firth visits his mother on her deathbed. She tells him of the Master Musician, a mysterious being living in Turkey, where his father, also a musician, died a long time ago.

Firth takes off for Turkey, to face the demons of his father’s past and find this mythical Master Musician. His trip takes us deep into the heart of arabic mythology, into a world inhabited by Djinns and Shaytans, respectively born of Air and Fire. He will learn many things about his father’s life that will bring him to the brink of insanity.

Directed by Jamil Dehlavi and filmed on location in Turkey, the cinematography of this film is so gorgeous you could watch it with the sound off. The plot isn’t so important as the powerful symbology of the imagery (for example, the eclipse is represented by a skull covering the sun). It must be said that the director does very little to explain the many references to the mythology. But this isn’t a weakness as it sent me on my own quest to find out more about it.