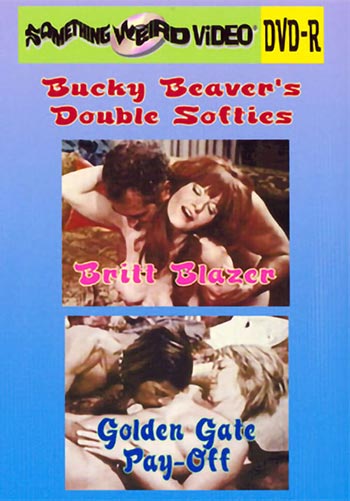 An unredeemable thug – complete with porkpie hat and cigar – and his busty moll kidnap the nubile daughter of a politician, tie her down to a bed, strip her clothes off and film her. And if her father doesn’t cough up valuable “transcripts,” things will get even worse. Of course only a moron would let himself be photographed in a criminal act…but don’t annoy us with details. Off -camera, the boss man and his babe take turns helping themselves to her body.

Enter Special Operative Britt Blazer, sort of a Honey West in crotchless panties, (who resembles Peg Bundy). After blowing the (faceless) guy giving her the assignment, she then poses as a door-to-door saleslady and, in about two seconds, persuades the henchman to have sex with her, before belting him cold. She unties the politician’s daughter…but things don’t go exactly as planned …
Like cheese? You can’t do better than this piece of schmaltz.