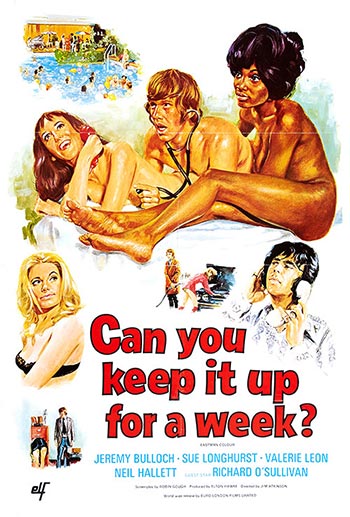 The male protagonist here (Jeremy Bulloch) has a gorgeous, generously breasted fiancée (played by the gorgeous, generously breasted Jill Damas from “Sex Play”) who refuses to marry him unless he proves he can “keep it up for a week”, that is keep a job for a week (get your minds out of the gutter, people). This doesn’t seem like all that difficult a task for someone to be considered marriage material, but ironically it results in him cheating on her about a dozen times.

This is one of those goofy 70’s British sex comedies in the mode of the popular “Confessions of” or “Adventures of” series where servile, demeaning employment somehow leads a young man to get more scrumptious tail than any young man could possibly handle (which makes you wonder why the real-life workers in Britain were always angry and on strike in the 1970’s).