Daughter of the Jungle (1982) Umberto Lenzi 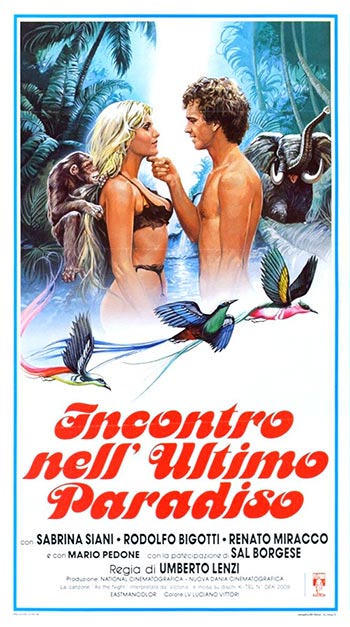 This film seems to be Lenzi’s way of poking fun at his own cannibal gore films. Two college students decide to take a vacation to the Amazon. While in a small village getting supplies, they provoke the anger of a local scoundrel, whose ruffians beat them up. After renting a boat and sailing down the river in search of some good scenery, the two kids become lost and are forced to jump in the water to avoid a cascade. Now totally lost, they enter a small village, where the natives eye them mysteriously. It is here that they meet a bizarre jungle female, who happens to be the last survivor of a helicopter crash that occurred years ago. She soon develops a bond with the two adventurers, and many funny things happen throughout the movie.

When compared to Lenzi’s other jungle films, this is a distinct let-down. However, when viewed on its own merits, it proves to be a highly enjoyable and entertaining film. This also contains a few well-used pieces of Budy Maglione’s music–which shows that maybe Lenzi really DID want to spoof his previous films. Anyway, Sabrina Siani is excellent as the jungle girl, and Sal Borgese plays a great criminal. Director Lenzi proves once again that he is no novice when it comes to creating a believable, entertaining genre film. Well done!