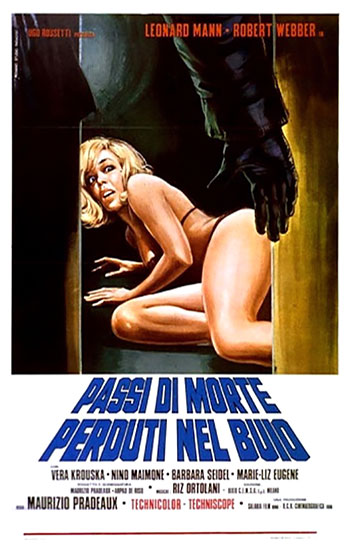 An Italian reporter is travelling on the Instabul-Athens train. A woman is murdered with the reporter’s letter-opener so that makes him the main suspect. With the help of his Swedish girlfriend he starts investigating in order to prove his innocence.

Luciano is a press photographer travelling to a photo shoot on the Istanbul-Athens express with his girlfriend. While passing through a tunnel, his girlfriend is stabbed to death with Luciano’s dagger. He is naturally the prime suspect for the murder, but he believes he can solve the case himself and so goes on the run to clear his name. On the face of it a classic giallo theme, but what we have here is a film that is an odd mix of authentic Giallo, black comedy and at times, outrageously bawdy comedy, in the vein of Airplane movies, the killer leaving his fingerprints in shit might give you an idea of its level. Still though, some of the humour is spot on and never reaches the level of being tiresome, there are also enough gruesome murders and suspense to keep real Giallo enthusiasts intrigued.