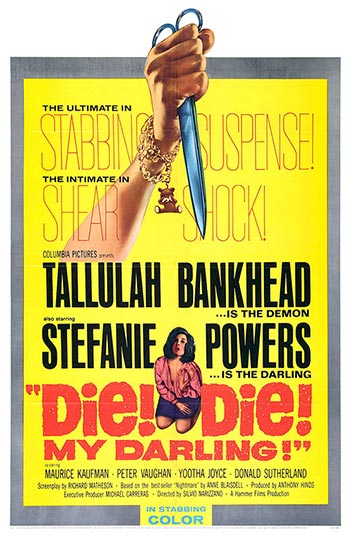 The spoiled Patricia Carroll arrives in London to get married with her fiancé Alan Glentower. However, the stubborn Pat decides to pay a visit in the country to Mrs. Trefoile, the mother of her former fiancé Stephen, who died in a car accident. Once there, the religious fanatic Mrs. Trefoile insists to Pat to stay overnight to go to the mass on the next morning. After going to the church, the naive Pat tells Mrs. Trefoile that she was not going to marry Stephen, triggering her insanity. Mrs. Trefoile abducts Pat to purify her sins and make her pure for her beloved son.

The spoiled Patricia Carroll arrives in London to get married with her fiancé Alan Richard Matheson’s script (based on Anne Blaisdell’s book “Nightmare”) keeps things credible, fun and engrossing the entire time. Bankhead, in her final starring role, is pretty horrifying (“Filth! Corrupter!”) and the supporting cast (especially Yootha Joyce) is excellent, making this one of the best of the Hammer psychological horror films.