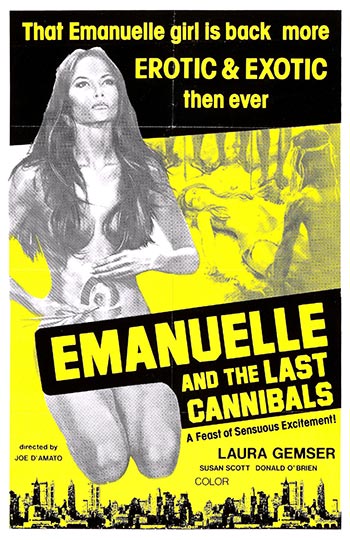 While doing undercover work in a mental hospital, Emanuelle discovers a girl who seems to have been raised by a tribe of amazonian cannibals. Intrigued, Emanuelle and friends travel deep into the Amazon jungle, where they find that the supposedly extinct tribe of cannibals is still very much alive, and Emanuelle and her party are not welcome visitors.

“Emanuelle and the Last Cannibals” is a sleazy cannibal exploitation sickie made by Joe D’Amato. It has lovely Laura Gemser plus plenty of soft core sex, some nasty gut munching and gore. The soundtrack by Nico Fidenco is quite effective. Laura Gemser plays a journalist Emanuelle who joins an expedition into the darkest and deepest corners of the Amazon after the patient in the lunatic asylum turns out to be sporting cannibal tattoo.