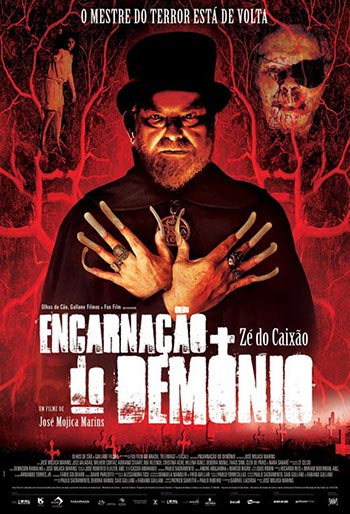 After forty years in prison, the evil gravedigger Josefel Zanatas a.k.a. Zé do Caixão is released by the lawyer Lucy Pontes in accordance with Brazilian Laws. He moves to the slums with his followers that worship him, and he seeks out the perfect woman to bear his children while haunted by the ghosts of his victims. The vigilante brothers Captain Osvaldo Pontes and his brother Coronel Claudiomiro from the Military Police chase Zé do Caixão in the slums to kill him and they find a track of tortured and mutilated bodies.

Embodiment Of Evil is an awesome contemporary exploitation horror and a very welcome return to form for director Jose Marins. Throwing in everything but the kitchen sink in terms of content, with some jaw dropping set piece torture sequences, some of them conducted for real, using body performance artists, it cheerfully pushes the exploitative envelope and delivers in spades for any fan. Marin, despite being in his 70s by now, could certainly teach these young whippersnapper directors such as Rob Zombie or Eli Roth a thing or two about real exploitation, and Embodiment of Evil is a contemporary Coffin Joe gem. It holds its sub plot elements together surprisingly well, and the viewer is still treated to Joe’s iconic camp rants against God, the Church and The State in general. There’s even some brief social commentary thrown in for good measure.