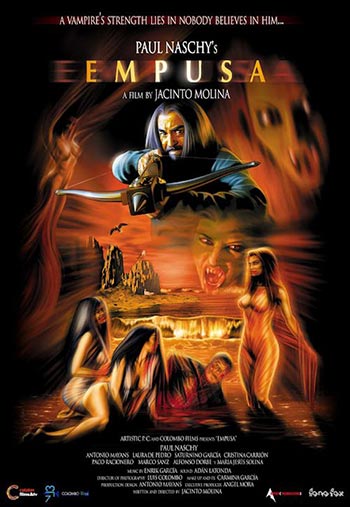 Abel (Paul Naschy) finds a severed hand on the beach. Instead of notifying the authorities, he starts doing his own research. Soon one severed hand turns into a whole slew of murders and Abel finds a connection to the Empusas, vampirelike beings. And only Abel is there to stop them.

“Empusa” turned out to be the swan song for Spain’s King of Horror, Paul Naschy, starring as well as both writing and directing under his own name, Jacinto Molina. Hearkening back to his glory days of werewolves and vampires in the early 1970s, this film differs most strongly in its frequently foul language (at least the English subtitles), which seems to be meant to be comical. Naschy plays former actor Abel Olaya, now earning a living studying the occult, finding a severed hand on the beach that begins a rash of odd killings that baffle the police. Abel learns that an ancient cult of female vampires called empusas are responsible, with ample nudity and gore with each attack.

As was usually the case, the women are irresistibly attracted to the bearded Naschy, who, even at 75, still appears healthy and strong, his long hair often tied up in a ponytail. He uses many items to fight the undead, such as crosses, knives (shades of “The Omen”), mirrors, even a violin (!). Paul Naschy goes out in fitting fashion, still on top of his game, this farewell released one year after his death on Nov 30 2009.