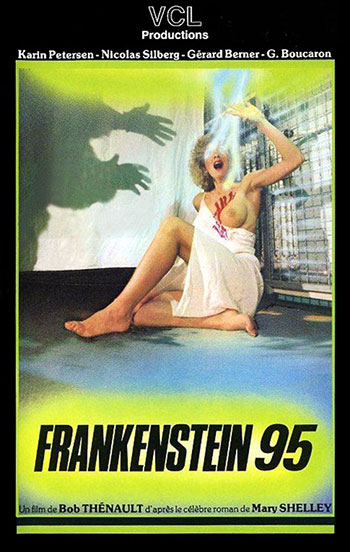 Obsessed with the idea of creating life, Count Victor Frankenstein turned to science that he considers capable of generating a new man. He began, at first, to research on animals and cadavers, to the grief of his teachers and community leaders in Geneva. His family is also terrified by his experiences. Condemned to isolation in the mountains, he takes this opportunity to experiment on a human being .

A weird version of the classic story that will get everyone confused. It sticks to the original storyline but adds some strange characters and plot points in the mix :

– A mountain wizard who predicts the coming of the new man on earth and have a series of fisticuffs with the Dr.

– A village idiot who will have rather strange effects on the good Dr’s experiments and a special relationship with Frankenstein’s mother, an old blind woman. He also has a big not so platonic kick for the Dr.

– A foster sister who becomes a big love interest and asks to pose naked for dear Victor who is also a skilfull sculptor.

– A strange and unexplained telepathic bond between the Dr and his creature. Or is it the Dr becoming schizophrenic and the peasants hysterics and having hallucinations?

That’s where IMHO the story becomes really weird and interesting and open to various interpretations according your humour and/or your patience!

– Many church people who want all this confusion to stop and kick the man out of their holy Bavarian neighborood!