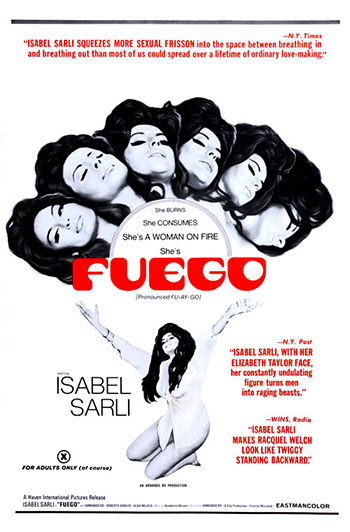 FUEGO’s director Armando Bo has been called Argentina’s answer to Russ Meyer, and the stunning (and, yes, well-endowed) star of FUEGO, Isabel Sarli, would not at all be out of place in a Meyer film. One is even tempted to describe FUEGO as a South American version of Meyer’s VIXEN, in that both films depict the exploits (or sexploits) of an insatible, irrestible woman. On the down side, Bo lacks Meyer’s flair for disorientating camera angles and rapid-fire editing, but nonetheless, FUEGO features enough inventive camera work and (of course) gratuitous nudity to keep the viewer alert, and contains moments that are erotic and disturbing — often at the same time! Overall, by no means a masterpiece, but a provocative and even compelling step above most so-called “nudie-films.”