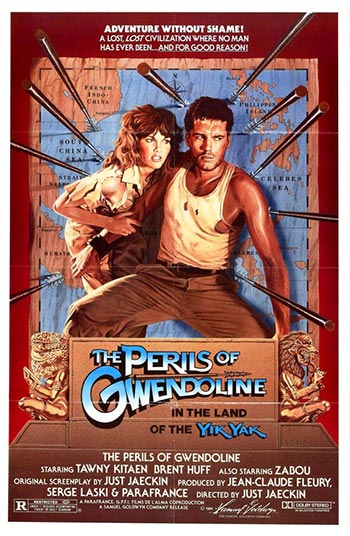 Gwendoline arrives in China in a box, and is helped out of her immediate predicament by a female contact and a devil-may-care adventurer. She’s on a mission to find her father, who was last seen searching for a rare butterfly in the Land of the Yik Yak. They confront the evil Cheops in an attempt to find Gwen’s lost father and the butterfly, and face many other challenges to their mission.

This has been called INDIANA JONES meets BARBARELLA but it’s so much more. By ignoring the comic book, Jaeckin has, ironically enough, preserved the graphic form on film. He is, after all (and first and foremost) a fashion photography so his arrogance of story structure leads to the best eye candy you’ll see in a long while. Sequences from this film may have resembled Jodorowsky’s aborted Dune project had it ever have been made! Sure the first half is pretty slow but it leads into the strangest and most mind-blowing balm-pottery ever to hit celluloid, as Gwendoline and her pals go on a mission to find a rare butterfly, her missing father and a lost civilisation. The city of Yik-Yak itself is some of the best visualisation I’ve ever seen, not unlike an S+M party in a salt mine. Forget the acting (PLEASE forget the acting) just sit back, listen to the vaguely Michael Nyman-esquire score and watch the mind-blowing images unfold. Otherwise, just pretend you’re watching TINTIN: THE MOVIE, as rendered by Peter Greenaway.