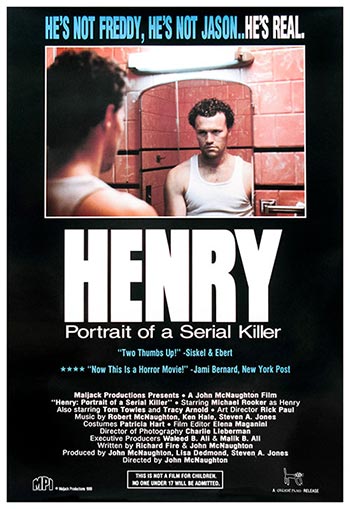 Henry likes to kill people, in different ways each time. Henry shares an apartment with Otis. When Otis’ sister comes to stay, we see both sides of Henry; the “guy-next-door” and the serial killer. Low budget movie, with some graphic murder scenes.

Henry: Portrait of a Serial Killer (1986) is a film that is loosely based upon the exploits of notorious white trash serial killer Henry Lee Lucas. This man claimed to have killed hundreds of people, mostly women. But the director takes us down the path of a man who is in many ways similar to the real deal.

The film follows the murderous trail of Henry who’s pent of rage and sexual frustrations fuel the madness that’s locked deep within his psyche. Those that are around him soon feel his madness and it’s brutal and fatal consequences. The director follows these three individuals with a pseudo-documentary feel. The rape and murder scenes are graphic and brutal as they should be. This is no mere exploitation film because there is nothing exploitative about it, as it should be.