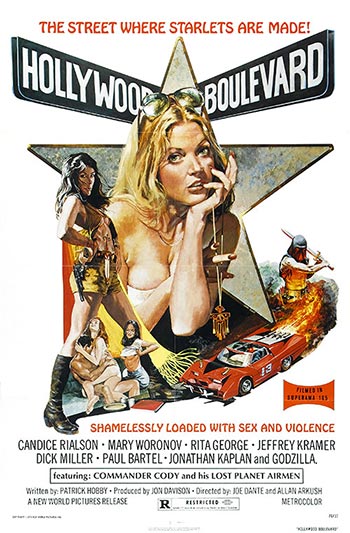 In this satire on 70s B-movie industry, a young ditsy pretty blond arrives in Hollywood to try her luck as an actress. After some mishap, a shady agent finds her a job with a sleazy B-movie crew plagued by strange deadly accidents.

Much like the film Airplane was a spoof of all those 70s airport movies, Hollywood Boulevard works brilliantly, as a parody of 70s B movies. Candice Rialson, herself a 70s B movie actress, was perfectly cast for the role of Candy Hope. Who could do better at playing a sexy B movie starlet, than Candice. In the role of Candy Hope, Candice was essentially playing herself. The gorgeous, statuesque B movie legend, Mary Woronov, gave a stellar performance as the villainous Mary McQueen.

This film is a real treat, for fans of both Candice Rialson, and Mary Woronov. These two actresses outshine their costars, from beginning to end, in this film. This movie is a fast-paced, satirical stab at the B movie industry, and the sexploitation films that were the meat and potatoes of it. This film isn’t meant to be taken seriously. It’s a fun romp, and recommended for 70s B movie fans.