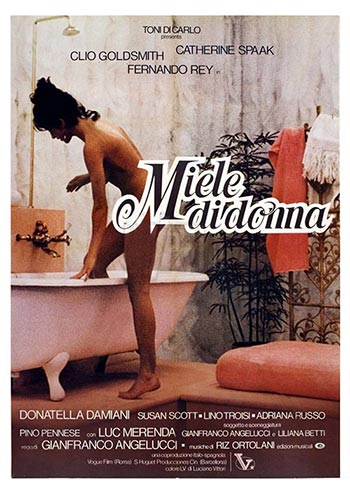 The young, naive Annie enters a hotel to spend the night – without knowing that it’s this special kind of hotel, that serves more than breakfast. Curiously she walks around and watches the maids doing their job. She’s especially fascinated of a forbidden room, where a silent, strange guy lives.

Miele di donna belongs to the rare breed of films which are genuinely erotic rather than just titillating. Its strength is the semi-real and overcharged atmosphere created by the cinematography, the sets, and Ortolani’s excellent music. It is somewhat debatable whether it was a good move to cast Clio Goldsmith in the lead, as she does not manage to radiate any innocence as her character seems to demand and she generally appears a wee bit bland. However, one could argue that her character’s innocence is faked anyway, after all she is the focus of a female sexual fantasy; actually, of two female fantasies, as the bulk of the film is a dream in a story in another story. In this sense, Ms Goldsmith plays a nice faked innocence.