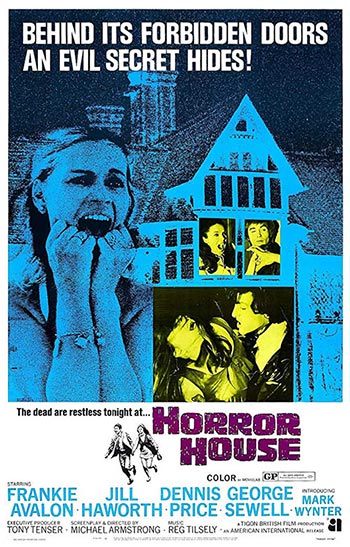 A group of sixties teenagers bored with the party they’re at drive out to a deserted old mansion, but their laughter turns to fear when one of them is killed in a frenzied knife attack. Another of them persuades the rest that they should solve the murder themselves rather than go to the police, not surprisingly opening the way to further carnage.

Ham acting, predictable plot and liberal lashings of ketchup make this a classic 60’s British horror film made in the ‘Hammer Horror’ time honoured way when the country was great at everything. It’s a very English treatment of a theme dominated since the ’70s by the likes of Wes Craven and other horror American film makers who have since thrown quaint charm out with the bath water (see horror classics like ‘The Haunting’ 1963 and ‘The Legend of Hell House’ for horror films which play subtly on the mind). The plot is so predictable these days it would be hard to end with a spoiler. Basically the story revolves around not for long fun-loving,swinging 60s teenagers wandering around a creepy, old, reputedly haunted house and getting bumped off by instalments. Umm. Unlike the unsubtle use of chainsaws in Texas what makes this film is the imaginative and atmospheric use of the interior and exterior location shots which give ‘The Haunted House of Horror’ a very creepy feel and a well deserved regard as a cult classic of it’s genre.