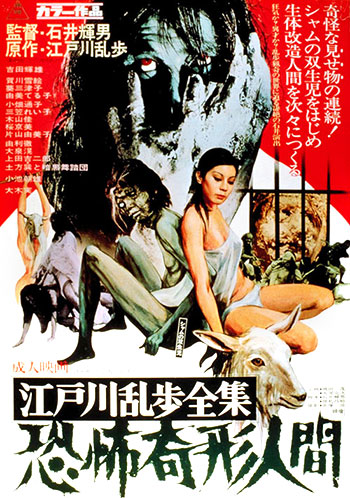 After escaping from an insane asylum, a young medical student takes on the identity of a dead man to discover the true identity of a man whose picture he saw in a newspaper–who is his exact double. His investigation leads him to a remote island where he discovers a sinister laboratory where a crazed scientist is performing gruesome experiments on live humans–and that his own family has a connection to the scientist.

An insane asylum, psychadelic dancers in silver body paint, siamese twins, a pond full of beautiful naked women who are fed from a boat like so many koi, a bizarre family mystery, matching swastika scars on the feet of two different men -one alive and one dead, second-hand cannibalism via crustacean, women sewed to sheep, an island of custom made freaks, an murder scene that was ripped off wholesale for use in a James Bond film (You Only Live Twice), and a revenge plot so insanely convoluted that it must have influenced Oldboy are just some of the head-spinning madness “The Horrors of Malformed Men” has to offer.