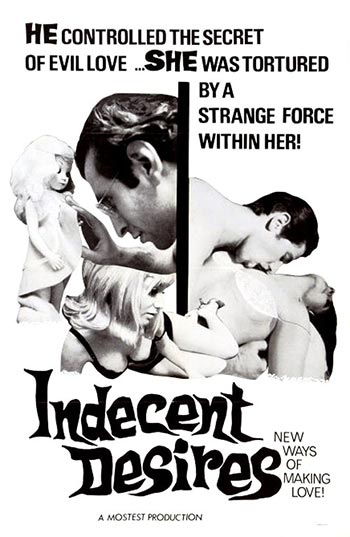 Zeb finds a doll and a ring in a garbage can. Then, he sees Ann going to work with her friend Babs. He thinks she looks like the doll. When he gets home, he caresses the doll… Ann feels it! When Zeb finds out about Ann’s fiance Tom, he really gets mad, burns the doll, and beats it up, which makes Ann think she’s losing her mind.

Doris Wishman sexploitation film mixed with horror elements features the same badness but this one here is just weird enough to make it somewhat entertaining. In the film, a dorky man finds a plastic doll in a trash can and takes it home because he’s sexually turned on by it. One day while walking he notices that there’s a secretary who looks just like the doll. Before long, this dorky man is touching the doll to get off and, through some sort of voodoo, the secretary gets the sexual pleasure from it. Technically speaking, this is just like every other Wishman movie in the fact that it was recorded with no sound and later all the dialogue was dubbed in. What separates this film from others in her filmography is the lead actress who is rather hot and constantly taking off her clothes. Yes, the nudity helps the film. The story is pretty good as well but Wishman’s lack of directing skills really keeps the film from being as good as it could have been.