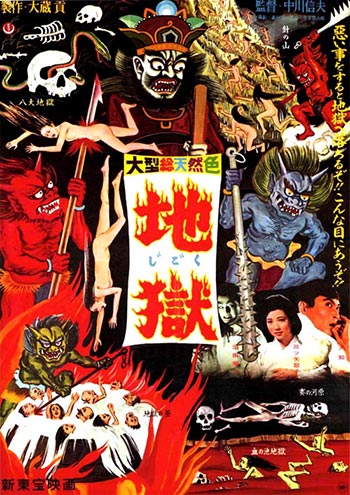 A graduate-school student has a friend who is pure evil. His friend and he are out driving one night when they hit a drunkard and the friend leaves the accident victim to die. The student’s life then goes downhill from there.

This is the granddaddy of all the extreme Japanese horror movies that have emerged and gained cult status recently. Not only is it amazing that this film was made more than 40 years ago, but, more surprising still, it was conceived, written, part-financed and directed by one of the most classically-inclined of Japan’s genre filmmakers. For some reason, Nobuo Nakagawa decided to suddenly turn his back on the period ghost stories which established his reputation, and create a contemporary exercise in Grand Guignol that was so far ahead of its time, his career never fully recovered.

Most reviews of this remarkable movie understandably focus on its last 40 minutes, which constitute the most bizarre, gruesome and sadistic scenes in any country’s studio-produced feature films up to that time. The picture’s first hour is usually unmentioned, yet in some ways it’s even more daring. Within a naturalistic framework, we’re introduced to apparently normal main characters with faults not very different from our own. After a couple of accidental deaths, the characters migrate to a hell-on-earth masquerading as a nursing home. The story becomes a wild mixture of pathos and black comedy, with satiric attacks on the supposed sanctity of parents, the aged, the media, the police and authority figures in general. The earthbound part of the film climaxes with the mass deaths of the nursing home’s patients, staff and visitors.

Jigoku is certainly not for all tastes, but viewing it is essential to an understanding of the modern Japanese horror film.