Knife Under the Throat (1986) Claude Mulot 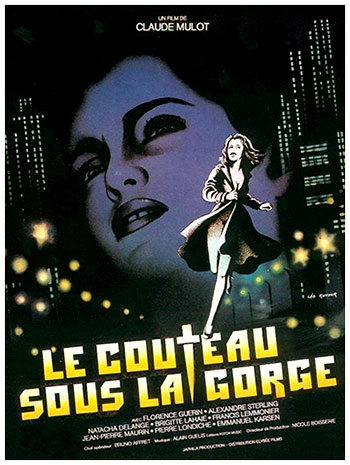 This one is a very rare french giallo making attempt. Director Claude Mulot already tried himself to a gender movies career back in the early 70’s and made a few flicks like La rose écorchée (a “Les yeux sans visage” copycat) and “La saignée” (a rather weak film noir). Probably not too successful, he then oriented his career to hardcore for several years before to try a reconversion in the early 80’s with a comedy, “Le jour se lève et les conneries commencent” (something like “The sun is rising and and we already start to do stupid things”, but the title is actually some kind of “tribute” to Marcel Carné”s “Daybreak” ). “Le couteau sous la gorge” is his last film as he drowned to death in a swimming pool the year after.