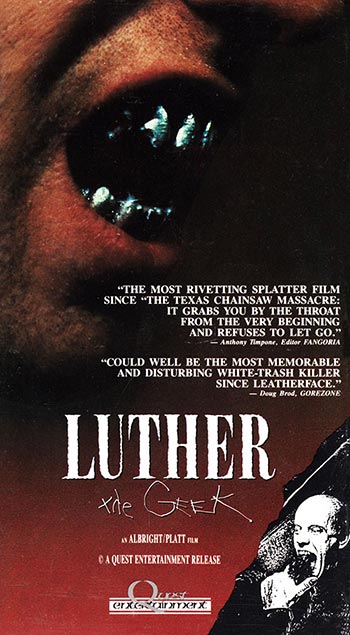 A young country boy is plunged into the depts of homicidal madness after witnessing the strange exploits of a carnival “geek,” a caged drunk so desperate for whisky that he bites the heads off live chickens in front of a freak show audience. Thirty years later, Luther is all grown up and out on parole, after spending his childhood behind bars for a series of grisly murders. Armed with only a pair of razor-sharp metal dentures and only able to communicate through chicken clucks, Luther restarts his bloody rampage as he terrorizes the citizens of a small town and takes a young mother and her family hostage in their isolated farmhouse. Featuring one of the most intense endings ever put on film, Luther the Geek is good gory fun in the splatter flick tradition of The Texas Chainsaw Massacre and The Toxic Avenger.