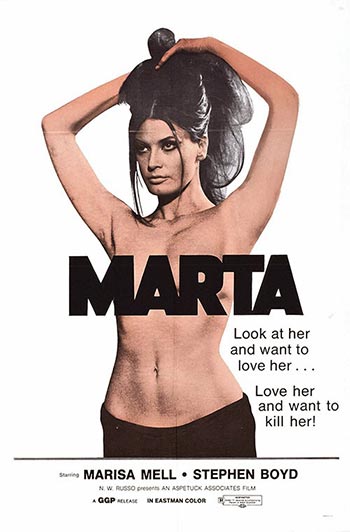 A madman torments his victims in his personal torture chamber.

Stephen Boyd, who died six years after completing this film (age 49), stars as Miguel, a wealthy landowner who is first seen murdering his mother when she walks in on him while making love. Marisa Mell, who also died young (in 1992, age 53), plays a beautiful fugitive who has apparently killed a man and finds a place to stay at Miguel’s sprawling estate. It doesn’t take long for the two to fall into bed together, although Miguel remains haunted by the disappearance of his wife Pilar, whose portrait bears a striking resemblance to his current paramour. The usual police investigation does not intrude much, and the film holds up rather well, despite a somewhat predictable climax. The two leads carry the film, and Marisa Mell does not disappoint with a fair amount of topless nudity. So far, only a dedicated Stephen Boyd fan has posted a review of this neglected film, which has not been shown for nearly three decades.