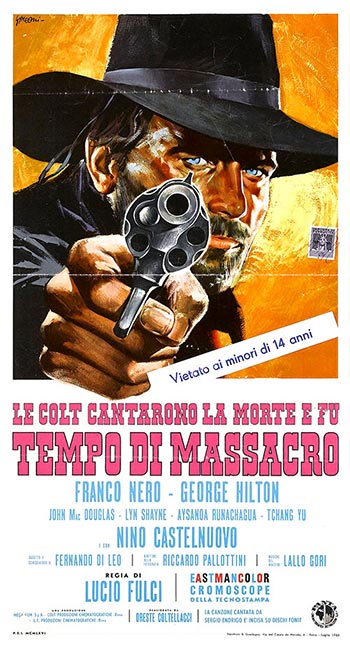 In 1866 New Mexico, Tom Corbett is a prospector who is called back to his hometown in Laramie Town, Texas at the bequest of a old family friend. Tom arrives in the town to see it under the control of a ruthless and greedy gangster named Jason Scott, who’s psychotic and murder-crazed son, Junior Scott, runs it with fear with a posse of thugs who kill anyone who protests their business tactics. Tom finds his brother Jeff, a drunkard looked after by their family maid Mercedes. Tom then tries to persuade Jeff to help him take down the sadistic Scotts so the town can rest easy in peace and harmony again.

“Massacre Time” proves, that Fulci is not only a Horror-genius, but also a competent director in other genres. While Westerns were certainly not his strongest genre, this film, as well as “Four Of The Apocalypse” are more than solid films that should not be missed. Franco Nero is great as always, it is no coincidence that this guy is one of the icons of the Italian Western. George Hilton also delivers a great performance as Jeff Corbett, Tom’s brother who is a great shot, in spite of his constant drinking. Nino Castelnuovo made a very good insane villain. The Chinese undertaker is another great and very funny character. A Fulci film, this is of course a pretty violent movie, people are almost whipped to death, a guy is lacerated by dogs, and the film does not scant with bloody bullet-shredded corpses. Lallo Gori’s soundtrack is also pretty cool, not phenomenal but decent. As many Westerns starring Franco Nero after Sergio Corbucci’s masterpiece “Django”, “Tempo Di Massacro” was marketed as a Django sequel in Germany and Austria. “Massacre Time” is definitely not as brilliant as “Django”, but it is still a great, original and very entertaining Spaghetti Western that should not be missed by genre-fans. Highly Recommended!