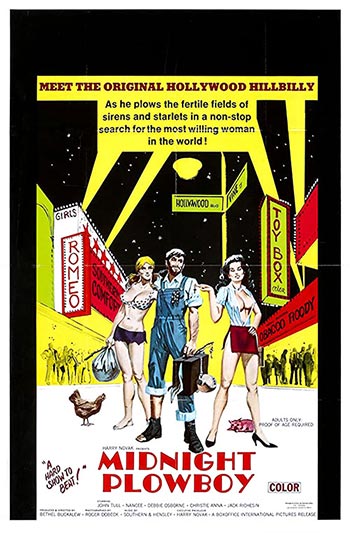 Junior comes from the country to Hollywood where he soon ends up living in a house full of prostitutes. As payment for his rent, Junior is assigned the task of driving the girls around in a van that doubles as a place to have sex.

Midnight Plowboy is one of director Bethel G. Buckalew’s greatest films in his all too brief career. While not as good as Boys Will Be Boys, Midnight Plowboy is a hilarious spoof of the pretensious 1969 film that stole the Oscar from Butch Cassidy and the Sundance Kid. John Tull and Nan Cee are the breakout stars of this film and should have had productive careers in the industry except for the public’s stupidity of not noticing true visionaries of film. The public prefers films like the Godfather and the French Connection. This movie parodies such so called serious classics and shows true depth and symbolism that is only matched today by a genius like Andy Sadaris. Midnight Plowboy is a true forerunner of such films like the Toxic Avenger and the Vice Academy. The Wizard of Oz was not a success when it was initially released in 1939, why not Midnight Plowboy? Mark my words, in the near future Bethel G. Buckalaw will take his place next to Orson Welles as a cinematic genius.