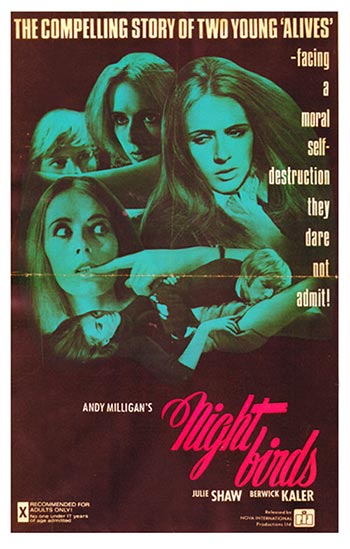 Audio 2: Commentary with Berwick Kaler (2011):
the stalwart of British stage and screen in conversation
with film expert Stephen Thrower

While living rough on the streets of London’s East End, a young man, Dink (Milligan regular Berwick Kaler – Coronation Street, Red Riding), encounters the beautiful and mysterious Dee (Julie Shaw – The Big Switch). Concerned for Dinks welfare, she invites him to stay with her and get off the streets. The two soon develop a curious relationship which oscillates, often without warning, between sexual intimacy and raging jealousy. As tenderness gives way to cruelty, they become consumed by darkness and their relationship spirals out of control.

Andy Milligan has an undeserved reputation as one of the worst film directors since Ed Wood. One hopes that the release of Nightbirds will help to restore him to a more favourable level of respectability. It is an interesting and well made film, pushing the boundaries of what was acceptable in the late 1960s, particularly in regards to depictions of and discussions about sex. It compares well with similar films from that period, such as Private Road (1971) or Duffer (1971). It also compares favourably to Andy Warhol’s Trash (1970) or Flesh (1968), films which also put people on the fringes of society in the full glare of the camera.