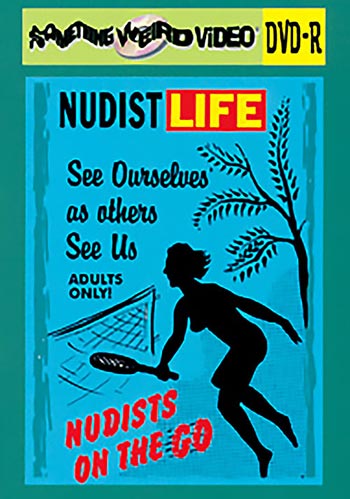 Finally! A film that dares to explore the intricate complexities and subtle social structure of Nudist Life in the early sixties!

“A busy schedule lies ahead for these nudists on their super sunny day!” Which, of course, begins with lounging. Hell, there’s nothing like a bunch of naked people cramming in some heavy lounging on an already hectic day!

Next up, walking! The nudists get up and, believe it or not, walk around! “They’re always on the go!” says the enthusiastic narrator.

After walking, these active nudists begin some strenuous relaxing by the pool! Not in the pool, mind you, but by the pool. “They sit about and chat!” Really!

Then, amazingly, they snack! Imagine! Naked women snacking right before your astonished eyes! “Even nudists must have food!” the narrator actually says. (Nudist women seem to prefer slurping on popsicles.)

Then, more relaxing and lounging before some feverish naked ping-pong and “a thrilling game of volleyball!” Except they don’t play volleyball. They toss a basketball through a hoop. No matter.

Some of the more adventurous gals even climb a tractor! “Yes, the life of a nudist is one thrill after another!”

Most of this is fifties footage shot at Florida’s ultra-glamorous Fair-View Gardens intercut with some old (seemingly prehistoric) film clips from 1930’s nudist camp shorts inelegantly spliced in at irregular moments. All in all, Nudist Life is clearly a milestone in naked motion picture entertainment. God Bless producer GEORGE WEISS.