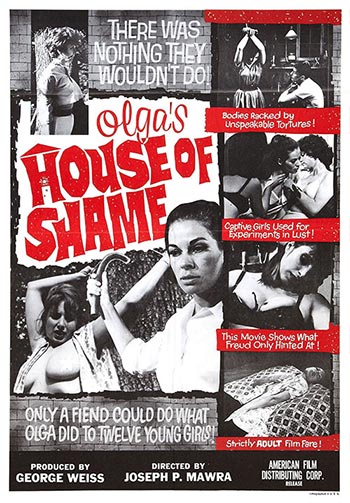 After having been run out of New York City’s Chinatown, brothel owner Madame Olga moves her ring of prostitutes and criminals to a deserted ore mine and starts over.

The pseudo mondo narration and the Wagner-like music gives the film an unique edge. It’s low budget but nicely shot (handheld camera, dogme-style!) in glorious b/w and Miss Campbell is captivating in a twisted sort of way. This torture/bondage fest must’ve been pretty shocking in 1964. John Waters went to filmschool in New York around that time and said it influenced him more than any Eisenstein movie! Waters was expelled within a year in a reefer scandal. Michael Medved was right: THESE FILMS ARE UNHEALTHY!

Producer George Weiss also backed another trash classic, Ed Wood’s “Glen Or Glenda”! “Olga”, an anti-PC masterpiece, and “Love Camp 7” are the obvious inspiration for the wonderful “Ilsa” movies and countless others. Jess Franco and Joe D’amato fans should defintely check in at this House Of Shame!