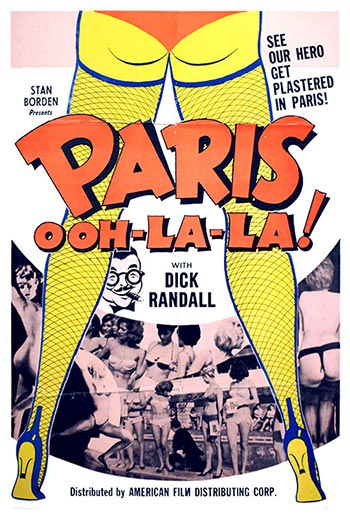 Though his name isn’t familiar to most, producer DICK RANDALL had an amazing career in exploitation films, churning out all sorts of head-spinning international schlock encompassing everything from Nudist-Camp movies (like Shangri-La, 1961) to horror films (Pieces, 1982) to kung-fu epics (Challenge of the Tiger, 1980) to mutant masterpieces like The Wild Wild World of Jayne Mansfield (1968), The French Sex Murders (1972), and For Y’ur Height Only (1981). A jovial ham at heart, Randall often played uncredited cameos in many of his films but Paris Ooh La La (which we assume he also produced) lets him star center stage as a crudely-mannered, cigar-chomping, typically “ugly American” loose in Paris – which, as expected, means going to strip clubs and making funny faces. (He also bears an uncanny resemblance to nudie-pioneer Russ Meyer.)

“This is the unthinkable, the incredible, cool, comic, inconceivable, stupefying, Rabelaisian story of what happened to me when I decided to go on a trip to Paris,” says businessman John Smith (Mr. Randall) moments before he enters The Crazy Horse Saloon, sits uninvited next to a woman he starts pawing, and watches two strippers demonstrate “the Parisian concept of tenderness” which involves much Parisian groin bumping.

Continuing to “gorge himself in the mad nightlife of Paris,” Mr. Smith next visits the Casino de Paris, where we’re treated to a near naked blonde stripper twirling a mean cape, and three beauties with feathered headresses doing a simultaneous strip routine with champagne glasses in their hands.

At the famous Folies Pigalle, Smith sneaks into the strippers’ dressing room “disguised” in a stupid wig. We also see “Naturistes” ROBERTO TALAMO and MARINA RAFAELA do an acrobatic dance number in leopard skins, and a lovely young lady who does a strip routine with a giant inflatable hand.

In between, our hero imagines a woman working in an office wearing only her underwear; gets involved with contestants of a poolside beauty contest; is seduced by three lovely ladies at the Gaslight club; and, basically, ogles anything female. In the film’s most dumbfounding moment, Mr. Smith is sitting in his hotel room crocked to the gills as an elegant woman wearing furs and accompanied by a poodle enters his room, takes a shower, then climbs naked under the covers of his bed. But when Smith pulls the blankets down, she’s now a he. Huh?

Most of the strippers are already so nearly naked that there’s little for them to remove. That, of course, is definitely not a complaint. Released in France as 24 Heures d’un Américain a Paris (the print also has that title on it), Paris Ooh La La was released in the U.S. by STAN BORDEN’s French-friendly American Film Distributing Corp.