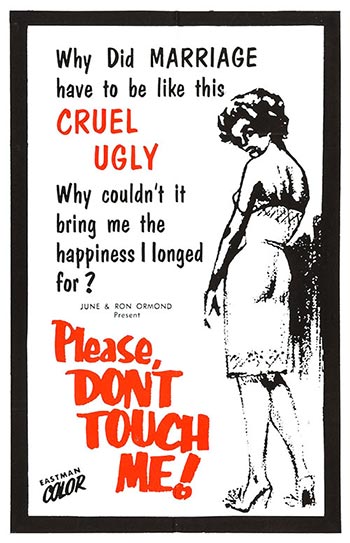 A woman who is unable to have sex with her husband goes to a psychiatrist for help. He sends her to a hypnotist, who finds out she has a deep, dark secret.

Responsible for such delirious drivel as Forty-Acre Feud, The Exotic Ones, and the insane “soul saver” If Footmen Tire You…What Will Horses Do?, one-man studio Ron Ormond and his family have produced some of the most outrageous exploitation films in history.

This was one of their most peculiar, featuring the lovely Ruth Blair as Vicki, a newlywed bride who cannot bear to have sex with her husband (cowboy star Lash LaRue). He thinks it’s because of her overbearing mother, and sends her to various wacky doctors and hypnotists who try to cure her with spinning hypno-discs and electric shock therapy. As in his later soul-savers, Ormond includes lengthy historical recreations, tracing the development of hypnotism, fakirs, self-flagellating Penitentes, open-heart surgery, and various sexual ailments.

Ormond appears as a mesmerist, there’s a picture of a cancerous scrotum, an audience- participation segment challenges viewers to hypnotize themselves, and the future religious zealots even provide some brief nudity to amuse the grindhouse crowd. Regardless of its internal lunacy and sleazy plot elements, this was still probably the closest that the Ormonds ever came to making a professional movie, with nice color and a level of technical proficiency that is somewhat baffling in light of their other films.

Fans of John Waters will eat this up! From the rockin soundtrack to the bitchy cardboard characters. The 5 minute sidetrek in the early part of the film is this bizarre mondo exploration of the ancient art of hypnotism and firewalking and glass rolling. What this has to do with the film is abstract at best, but it somehow justifies the hypnosis that this poor girl is about to undergo. It’s really just an excuse to see some saucy T&A, and some freaky primitive cultures.