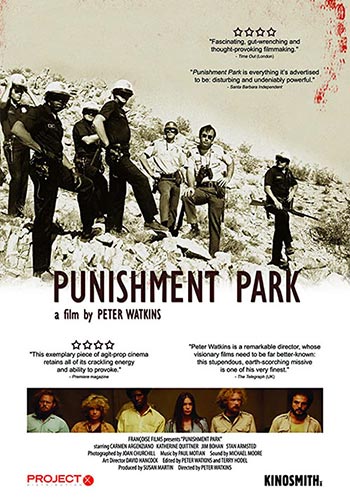 Call it a pseudo-documentary, an outrageous piece of propaganda, perhaps even a paranoid fantasy, but one description that definitely does not apply to Punishment Park is “light entertainment.” Brit director Peter Watkins offers a chilling scenario, set in the early ’70s, in which, according to an edict called the McCarran Act (which did exist, albeit in different form), the U.S. government has the right to detain (without bail, evidence, or anything resembling a fair trial) anyone who “probably will engage in certain future acts of sabotage.”

The detainees, most of them ’60s radicals, are offered a choice between long prison sentences or three days in “Punishment Park,” a scorching stretch of the Southern California desert; should they choose the latter, they will be released upon reaching an American flag planted many miles away, all the while avoiding capture (or, more likely, death) at the hands of a bunch of gung-ho cops, National Guardsmen, and other law enforcement types.

The film alternates between the “tribunals” where the radicals’ fates are decided (and where the shrill hectoring and sloganeering–on both sides–come fast and furious) and the grim scenes in the desert. And although Watkins clearly takes the side of the prisoners (as does the fictional film crew on hand to document the proceedings), no one emerges entirely unscathed: the politicians, “average” Americans, and others holding forth at the tribunals are all right-wing blockheads (“more spank and less Spock” would have taught those whippersnappers a lesson, says one), the cops and guardsmen are all trigger-happy jerks, and the young radicals are mostly callow, rhetoric-spouting stereotypes. Violent, provocative, and convincingly shot in cinema verite style, Punishment Park will leave many viewers muttering that it can’t happen here. Opponents of the Patriot Act and its perceived attack on civil liberties, however, will likely take another view.