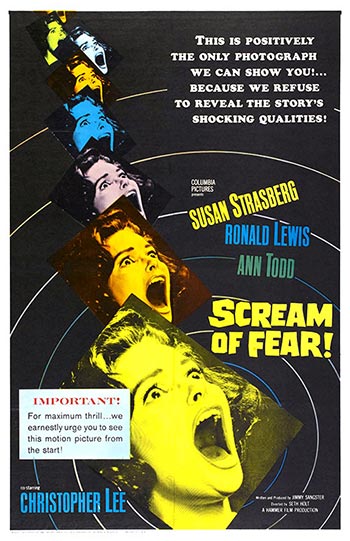 Audio 3: The BFI Southbank
Interview with Jimmy Sangster Conducted by Marcus Hearn at
BFI Southbank London on 15 April 2008
(Plays as an alternate audio track over the film 67mn)

Audio 4: The The British Entertainment History Project (BEHP)
Interview with Douglas Slocombe Part Two: From Hammer to Spielberg
excerpted from an interview conducted by Sidney Cole
on 22 November 1988 (Plays as an audio track over the film 81mn)

After narrowly surviving an accident in which she nearly drowned, the wheelchair bound Penny Appleby returns home to live with her widowed step-mother Jane on the French Riviera. She begins to question her sanity after several times seeing her father’s corpse around the house and its grounds, and enlists the help of the friendly chauffeur Bob while attending Doctor Gerrard acts in a suitably sinister manner. No one is who they seem in this tale of intrigue and suspense.