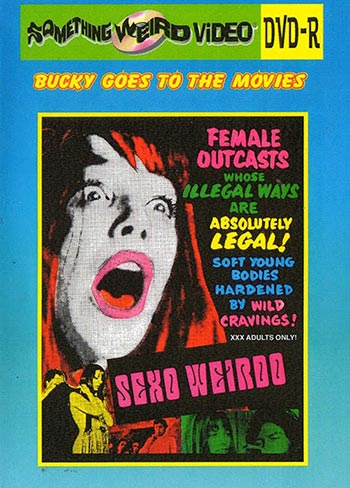 What would happen if Bucky himself directed a film?

You guessed it – no plot, no story, just beaver, beaver, beaver!…In other words, Sexo Weirdo! Among the twat talent on display is “bitch goddess” Wendy, clad in a leather corset, who “acquired the candle habit at the age 15.”

Then there’s a German go-go dancer” with an admirable 42-inch pair” who flaunts herself to the “masochistic males in the audience who would love to be her slave.” Wotta gal!

Busty MARIA ARNOLD show us her butt hole and masturbates with a shoe. A writhing transsexual in pink panties thrusts his/her bulging crotch at us.

And the ubiquitous RIC LUTZE wears thick blue eye makeup “to make sure he looks cute” before getting it on with LINDA YORK and SANDI CAREY.

A foxy French lesbian likes “fresh young American girls,” and Miss York pops up again, this time in scary hippie attire, to get tittie-fucked by a greaseball. Then a bearded guy rides two wild fillies before he “shoots his rocks in no time flat.”

We next meet Joy. Pissed off at getting knocked-up by her two-timing boyfriend, Peter, she plans “a night of love he’ll never forget.” After he’s tied to a bed, Peter is first ravaged by Joy’s gal-pal Cindy, then Joy joins in and the two make sure he gets it and gets it until he “can’t stand it anymore.”