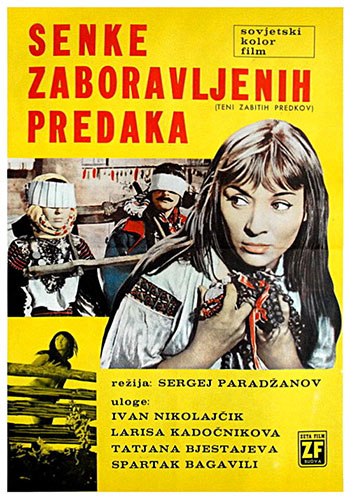 In a Carpathian village, Ivan falls in love with Marichka, the daughter of his father’s killer. When tragedy befalls her, his grief lasts months; finally he rejoins the colorful life around him, marrying Palagna. She wants children but his mind stays on his lost love. To recapture his attention, Palagna tries sorcery, and in the process comes under the spell of the sorcerer, publicly humiliating Ivan, who then fights the sorcerer. The lively rhythms of village life, the work and the holidays, the pageant and revelry of weddings and funerals, the change of seasons, and nature’s beauty give proportion to Ivan’s tragedy.

This is a haunting film filled with deeply moving imagery and symbolism. It is a well known art-house and film student favorite and for many excellent reasons. It is beautifully filmed and accurately portrays Ukrainian-Hutsul society with all it’s mythology, superstition and rich culture. Of interest is that it was released in it’s native Ukrainian language during one of the Soviet Union’s cultural thaws under Khruschev. Not many films were allowed to even be produced in Ukrainian during the Soviet regime. Definitely worth seeing.