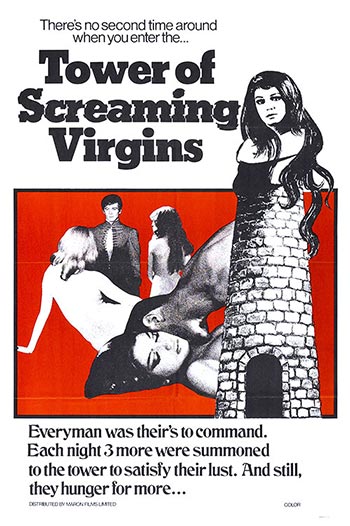 Every man was theirs to command. Each night three more were summoned to the tower to satisfy their lust. And still they hunger for more…

King’s swordsman Captain Buridan, hero of the Flanders campaign, returns to Paris to find it in a grip of fear -a “vampire/witch” in the “Tower of Sin” is luring young men to their deaths by offering them a night of sexual ecstasy followed by savage slaughter: “You’ve had your fun -now its our turn!” Buridan is holding secrets of his own and his battle to save France from an evil Chancellor, an impotent King and a lascivious, wanton Queen make the battlefields of war seem like child’s play. The killer may be a beautiful beast above the laws of man but finds she’s not above poetic justice while the Musketeer saves the day for the French monarchy.

Alexandre Dumas’ works are action-packed adventure tales that skillfully blend history with fiction -and this lively adaptation with its surfeit of sex & savagery has suffered in obscurity thanks to a sleazy ad campaign. Filmed internationally as “The Tower of Nesle”, it was later changed to “Tower Of Screaming Virgins” and dumped on the U.S. drive-in/sexploitation circuit. Ironically, it turns that misogynistic genre on its ear. There are virgins (and yes, they scream!) but -they’re all young MEN! The film is actually an erotically charged romantic thriller of French medieval times/crimes on a lavish scale -with abundant doses of murder, sexual debauchery, intrigue & skulduggery at the palace of Louis X.