She Should Have Stayed in Bed (1963) Barry Mahon 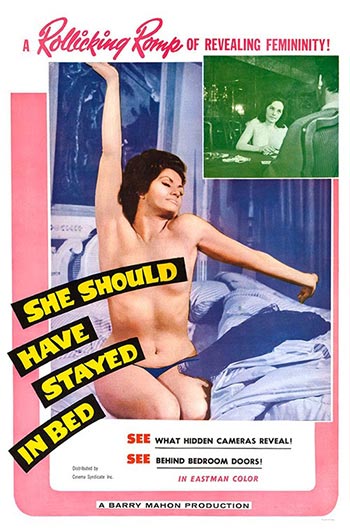 A New York photographer takes photos of various tenants in a posh apartment building while waiting for a nude pin-up model to show up for him at his studio.

Main gimmick is a guy (credited as “Mike Baron”) chasing a pretty (fully clothed) girl down corridors for over an hour, as we see gals in various apartments disrobing or posing for still photo sessions. They’re all glamor models, and the nonstop array of varied bare breasts has to be considered satisfying by 1963 standards. Attempts at comedy, notably a gag of a guy haplessly trying to deliver a wedding cake with slapstick results, all fall flat.

Highlight is clearly a pointless but arousing doling out of footage of Audrey Campbell endlessly combing her long, lovely hair, sprawled topless (her nipples jutting out) on a couch. Perhaps this served as audition footage for landing her the historic role of Olga in the definitive ’60s S&M series of films.