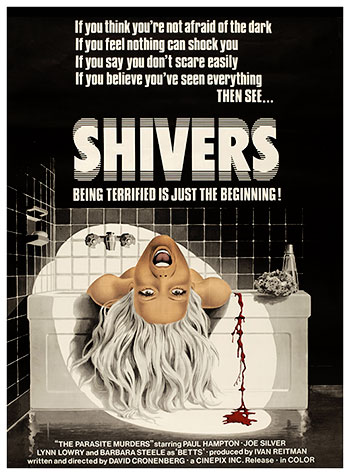 A scientist living in an apartment complex kills a girl and uses acid to destroy her internal organs, and then kills himself. While investigating, a doctor discovers that the scientist was doing experiments on the use of genetically engineered parasites as organ transplants. Soon, other people in the complex begin showing signs of carrying the parasites, spreading the things through wanton orgiastic abandon, and the complex begins suffering an attrition problem.

“Shivers” is the third feature of this great Canadian cult director David Cronenberg, indeed a very low budget trash movie, with a final cost of US$ 179.000,00. The story mixes humor and horror and the effects are very nasty and disgusting, a trademark of Cronenberg. The story is a kind of sexual version of “The Night of the Living Dead”, with people turning out zombies of sex. The screenplay of 1979 “Alien” used many concepts of this movie.