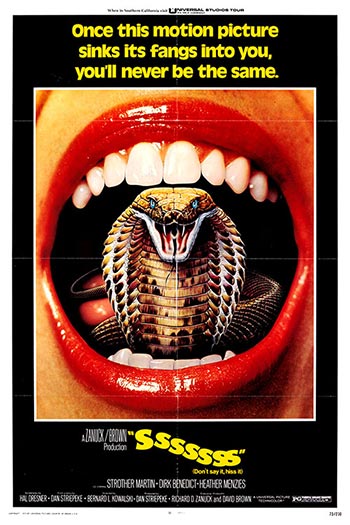 David, a college student, is looking for a job. He is hired by Dr. Stoner as a lab assistant for his research and experiments on snakes. David also begins to fall for Stoner’s young daughter, Kristina. However, the good doctor has secretly brewed up a serum that can transform any man into a King Cobra snake-and he plans to use it on David.

Sssssss (love that campy title, that’s seven S’s folks) is an above-average man-becomes-creature horror film. The film is very well made and despite its seemingly cheesy premise actually creates itself an effectively serious tone. The story is intriguing, thanks largely to the likable and well-rounded characters, and builds to some terrifically chilling scenes as well as a nice show-down finale. The makeup effects are solidly created and genuinely creepy. The lovely music score by Patrick Williams is also a highlight.

The cast is definitely one of the films best features. Veteran actor Strother Martin is excellent as he balances his performance between fatherly teacher and sinister scientist. Young Dirk Benedict is charming as Martin’s young assistant and attractive Heather Menzies delivers a sincere performance as Martin’s daughter, and Benedict’s love interest. Also Reb Brown makes for a good bully.

So, you don’t have to like snakes to enjoy this intelligent old-fashioned horror tale. It’s definitely one of the best of its kind and well worth catching for fans of old school B horror.