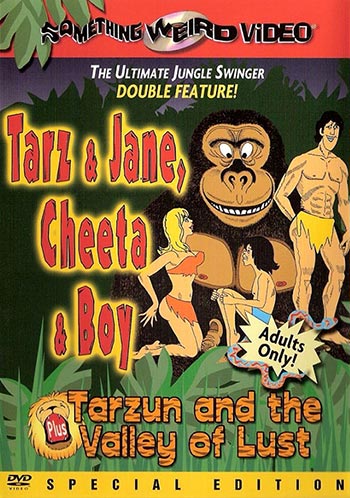 Imagine if you dare an adult version of George of the Jungle. Now recast the entire movie with a late 60s era cast. Reduce the budget to what a troupe of impoverished student performers might have access to and lower the humor standards to bargain basement sight gags and sex jokes and you’re probably looking at a movie with better production values than Tarzun in the Valley of Lust! This is so bad it’s hilarious. Jayne looks like a hairdresser, Tarzun could easily pass for a surfer or beach bum, and the natives. Well the natives were just a half dozen black folk. If you think that sounds politically incorrect then wait until you hear about the movie. This is, in short, a softcore porno. There’s simulated sex, both between man and beast, or rather a man dressed as a beast, specifically an ape, and the two actresses.

This is a shamelessly crude and rude production, yet it’s probably much more fun to watch than contemporary T&A flicks like Playmates of the Apes or Kinky Kong. As for the plot? There wasn’t much of one. Essentially the story revolves around the Gorilla chasing the girls, Tarzun chasing the gorilla away from the girls, and everyone getting naked. That’s it.