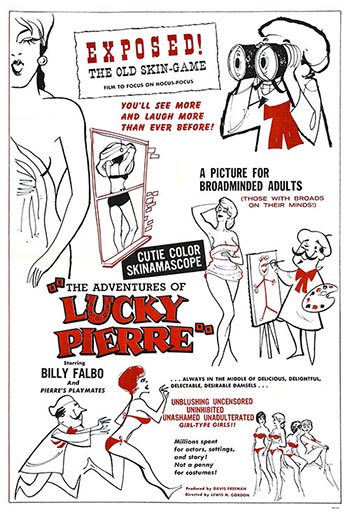 A man imagines that everybody he sees is naked. He goes to see a psychiatrist to see if he can be cured.

What THE IMMORAL MR. TEAS unlocked, THE ADVENTURES OF LUCKY PIERRE wrenched open. Herschell Gordon Lewis’s nudie cutie – the first of its kind to be released in color – was a raging success and contributed to the flood of similar films that would eventually be washed away by the evolution of the roughie and the other, more callous genre Lewis would later trailblaze with BLOOD FEAST.

Lucky Pierre is a janitor/handyman of sorts. And he has a problem. Everywhere he looks, he encounters nude women – in the park, in some guy’s bathroom, while bird-watching, at a movie theater. True to genre form, it’s a harmless and silly film, stuffed to bursting with creaky gags, nekkid women and a jaunty, organ-heavy score that lays across the film’s sound mix, negating the need for sync sound. Lewis’s flick lacks the visual sophistication of genre grand poobah Russ Meyer, but it’s also a bit friendlier.

The Adventures of Lucky Pierre (1961)