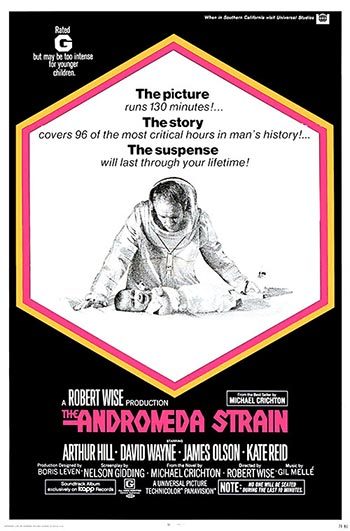 A satellite crashes near a small Arizona town, bringing with it a deadly alien virus in this science fiction thriller based on Michael Crichton’s novel. After the townspeople are wiped out by the contagion, a team of scientists bands together to eliminate the virus before it spreads nationwide.

‘The Andromeda Strain’ is an engrossing film from beginning to end. It is science fiction, alien virus comes to earth type thing, but has more depth than just that. The scientists, played very well by Arthur Hill, David Wayne, Kate Reid and James Olson, are fallible and have real emotions. Yet in them is a longing to know, to discover, to solve. Most popular cinema celebrate the fist or the gun but part of the excitement of this film is the use of the intellect to tackle the problem. Brains and not brawn is key.

The early scenes in the town of Piedmont are fascinating. Nothing dramatic, only small details adding up to a large tragedy. Restrained film making is not common but in this case it is really effective. After these scenes the film moves on as fear and wonder grip the scientists to a satisfying conclusion.

The electronic music is just right, the sets are atmospheric, the hard ware plausible and the photography simple and effective. A mention should be made of Paula Kelly as a nurse, an excellent actor and shamefully under used in films. (She is great in ‘Sweet Charity’ too.) In a supporting role she gives an intelligent, spirited performance.

A near perfect film.