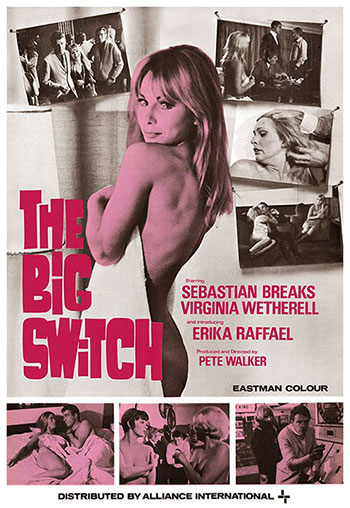 Playboy John Carter is implicated in the murder of a blonde from a discotheque and is forced by gangsters into posing for pornographic photographs.

Opening with a “bird” taking her clothes off then being gunned down for her troubles, Strip Poker (a.k.a. The Big Switch) concerns hard man playboy John Carter. Seemingly the most unluckiest chap in the West End, within the space of a few scenes Carter manages to lose his job, discovers his girlfriend dead and is beaten up by three thugs (one of whom is a very young Derek “Eastenders” Martin). Turns out its all an evil plan by gangster Mendez (super suave Derek Aylward) to blackmail Carter into journeying to Brighton, to do a job. What this job entails remains a mystery till the last reel, in the meantime Carter and Virginia Wetherell are held hostage by Mendez’s goons, and forced to participate in sadistic photo shoots supervised by a drooling pervert photographer and two “crazy acidhead” dolly birds.